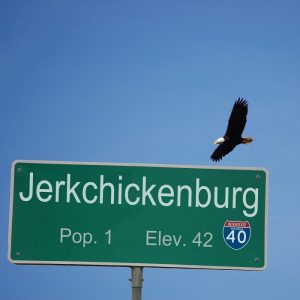 What the critics have been saying:

I dunno, I think it’s some kind of weird web-based multi-media concept-EP type of thing. Do I get the money now?
— bloke in Hastings

“A triumph! An idiosyncratic and endearing smorgasbord of intertwining emotional strands. A multi-sensory delectation!”
— Dylan Springer

Jerkchickenburg, Arkansas, world renowned as the birthplace of the eponymous sandwich*

… Jerkchickenburg has none of these.

* The Jerkchickenburger is enjoyed around the world, particularly with a large glass of Montepulciano at airport cafes, having missed flights to Stockholm

On summer nights, every second Tuesday, except when the moon is in the seventh house, people from miles around descend on the town’s English-themed pub The Queen’s Left Nipple to hear locals (such as resident penguin herder, Keith Foster) singing songs of winter in their old homeland of Hastings, East Sussex. Rock a Nore Morning is one such song.

Jerkchickenburg has a ritual in which, as each new generation enters the world, a number of songs are written and recorded to mark the occasion. Don’t be Afraid is one such song. As our resident philosopher once said:

Living in a Crowd

Visitors come and visitors go. A friendly Texan by the name of Andrea C. Renfree dropped into town a few years ago – actually really quite a lot of years ago, but even though it really was a very, very long time ago now, time flies so fast in Jerkchickenburg that it seems like yesterday. Why, I was talking just the other day … (Ed: Okay, okay, get on with it) … sorry, I digress, where was I? Oh right, yes, Andi took an idea for a song from Allison Lancaster (about a girl Alli once knew) and wrote a wonderfully poignant and moving lyric. Keith put a tune to it but couldn’t create an arrangement he liked until now. It’s called Living in a Crowd.

Some say that money makes the world go round.  In Jerkchickenburg it’s widely believed that it’s hamsters.

As you’ll notice, it’s an instrumental. There once were words but they were in the long defunct and painfully difficult to speak ancient language of Jerkchickenburgian. No-one could pronounce them and no-one knew what they meant. This was very embarrassing for all concerned.

* Odd but untrue is – strangely and coincidentally – the town’s motto.  You couldn’t make this stuff up.  At least not if you expect to get paid for it.

Legend has it that Lord Byron once visited Jerkchickenburg. Any sensible person would dismiss that as myth and nonsense, although it might explain how a couple of lines alluding to one of his poems found their way into the popular Jerkchickenburg song Blue.

Once We Were Just Happy

Jazzy guitar chords, bongos and a walking bassline overlaid with smoky tenor sax riffs; these are exactly unlike the sorts of things for which Jerkchickenburg is renowned.

Hence it is very strange indeed to hear a song like Once We Were Just Happy emanating from the back room of the pub.

Every five years Jerkchickenburg hosts its “Annual Short Film Festival”. (Hey, don’t ask me. We’ll just have to assume that they don’t know what the word “annual” means). The winner last time wasn’t this one:

Walking Down the Road Again

Back to the music – sorry but it has to be done. It’s no use complaining. You shouldn’t have come if you didn’t want to listen. It really gets my goat. I’ve just about had it with … (Ed: Okay, okay, quit haranguing the nice people and get on with it)

I’m reliably informed that this track was originally written and recorded in about 30 minutes after a couple of bottles of Malbec late on a Friday night. It’s been tidied up a little since. It’s called Walking Down the Road Again

All characters appearing in this work are fictitious. Any resemblance to real persons, living or dead, is purely coincidental, with the possible exception of Lily and Keith, on whom the jury is still out. Please remember that the value of investments including property and the income derived from them can go down as well as up. Please remember that the same applies to elevators. Always consult your physician before doing anything. This webpage is not intended to diagnose any medical condition or to replace your healthcare professional. If you experience any pain or difficulty with these songs and videos, please stop and consult your doctor